Are you sure that you want to change language to Swedish?
Yes
No
Menu
Search
SV | EN
Book
Book room DAY SPA TREATMENT Conference Biohacking Table Gift card My pages 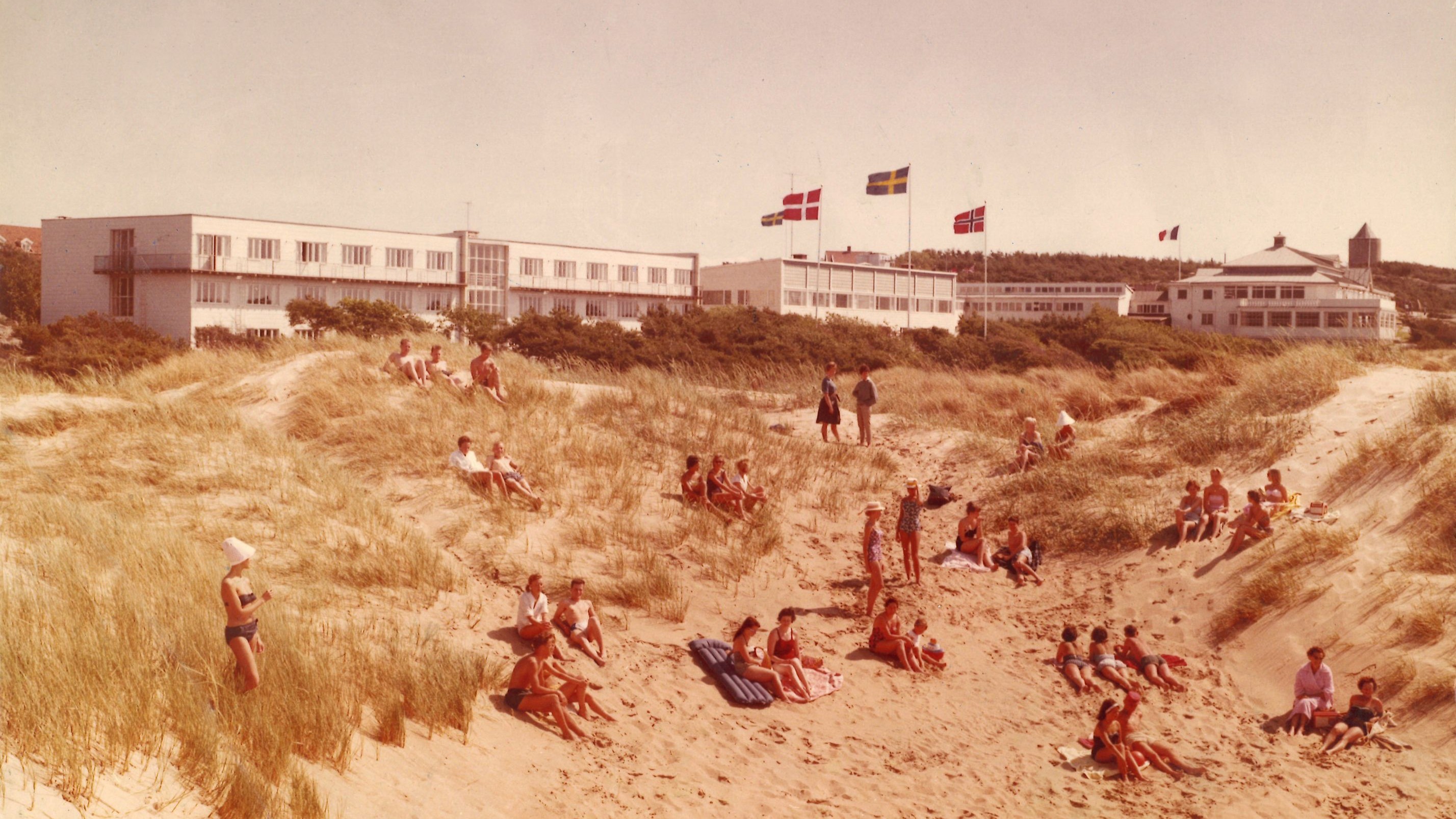 The Smuggler’s nest that became a seaside resort
During the second half of the 19th century, it became fashionable to travel to seaside resorts for relaxation and beach life during the summer. Mölle in the southern province Skåne was first to jump on this new trend in Sweden, and soon became the international talk of the town when the news spread that both men and women were having a swim at the same time. Quel scandal—and in a flash the term "the Swedish sin" was born.

Halmstad and Tylösand followed rather quickly. In Halmstad a couple of driving forces had noticed with growing discontent that affluent people left the rather unglamorous town to spend the summer in more established seaside resorts. One of them was photographer Johan Hallberg, who thought that the town with its nice nearby beaches should be able to attract visitors during the summer season.

DELIGGTED BY TYLÖSAND
The main question was where to establish a seaside hotel and restaurant. In September 1912 a delegation of gentlemen went out to Långenäsudden and Tjuvahålan to seek out a suitable location.

Shortly thereafter the local paper Hallandsposten with slight excitement reported that: ”The commissioned was especially delighted by an area on the west side of Tyludden, the so called Tylösand. Here you could surely  be able to create a typical west coast seaside resort that could compare with – and surpass even – our foremost seaside resorts here on the west coast.”

But for that to happen, the communications between Halmstad and Tylösand had to be sorted out. There was talk about building either a road or a railway, but none of those plans was realised. They instead decide to rely on the boat traffic which since the turn of the century has taken the few seaside enthusiasts out to the remote beach.

SMUGGLER'S NEST
Before all this, the place wasn’t especially glamourous. The area around Tyludden and Tylösand was difficult to reach and mostly frequented by fishers and smugglers – which explains the name Tjuvahålan (The thief’s hole).  In 1870 The Customs authority built a customs station in Tjuvahålan to fight the smuggling, and the same year a lighthouse with living quarters was built on Tylön.

For hundreds of years the land around Tylösand had been seen as worthless – a big deserted area of sand without vegetation or settlement. The land was owned by the city of Halmstad, but situated in the village of Söndrum. Most people regarded the project as doomed.

But with the smugglers gone, the growing summer tourism in view and French seaside resort Trouville in Normandie as a role model, photographer Johan Hallberg in 1915 built Restaurang Tylösand; a beautiful but modest building with a restaurant, a porch and ten guest rooms.

THE SUCCESS BECOMES INCORPORATED
On August 31 1915 the hotel was officially inaugurated, and everyone who has been sceptic about Hallberg’s plans realize that their misgivings has been unfounded. The the new resort by the sea was an immediate success, and three new rooms were added the next year.

At the same time plans were made to incorporate the business. The process turned out to be slow, however. In April 1917 a constituent shareholder’s meeting was held, and on March 5 1920 AB Tylösands Havsbad was registered at the Royal agency for Patents and Registration.

BEACH LIFE FOR EVERYONE
Up until 1929 guests had to travel with boat between Tylösand and central Halmstad, but when a better road was built the boat traffic wasn’t needed anymore. That same year the great Halmstad art exhibition was arranged, and the small hotel by the long sandy beach got a bigger break, making Halmstad an increasingly popular seaside resort both in Sweden and abroad.

Johan Hallberg quickly expanded his business with Restaurant Tylöhus and Hotel Tylöhus in order to accommodate the growing number of guests. What had been a summer pastime for the few that were very well off soon became available for most people. Vacation time became longer, and beach life was attracting guests from far away. The dreams from 1912 had become a reality: Tylösand was now established as a seaside resort second to none.

GESSLE/NORDSTRAND CELEBEATE 25 YEARS
There is a second anniversary to celebrate beside the 100 years since AB Hotell Tylösand was incorporated. During 2020 it’s also 25 years since Per Gessle and Björn Nordstrand took over as new owners in the summer of 1995. The unexpected constellation between the business man Nordstrand and the international pop star Gessle – who by then had just finished his second World Tour with Roxette – turned out to be exactly the kind of injection of innovative thinking that the hotel needed to write its most exciting chapter.

So why did Per Gessle and Björn Nordstrand decide to become hotel owners?

LOVE FOR TYLÖSAND
The main factor was of course that both had their roots in Halmstad. They knew Hotel Tylösand’s history and felt that they could do something worthwhile with one of Sweden’s few remaining privately owned hotels.

The change started immediately, leading up to today’s sophisticated hotel offering with 230 rooms, as well as being one of the Swedish west coasts most attractive conference centres with 32 conference areas and business events all year. And all this while also transferring the whole building into Sweden’s biggest art gallery with a collection of international photo art that’s in a class of its own.

She’s been there all the way – from creating prototypes of new and innovative room concepts to the total makeover of Leif’s Bar & Grill, The Spa and the Sun Garden (Solgården), all the way down to the fine-tuning of flower arrangements and candlelight placement.

Actually, most of what you see at the hotel bears Åsa’s signature. The penthouse suites with their 90 sqm of luxury living and breathtaking sea view. The Spa with its fitness facilities facing Kattegat. The four restaurants, each with its own concept. The spacious and welcoming lobby. Different spaces, all sending the same message.

An injection of glamour
Inspired by a natural and harmonious design-style where dark colours and wooden details creates a stylish, warm and homey atmosphere, Åsa started transferring the hotel’s interior decoration in a way that has given the hotel a style of its own.

By making all windows wider towards the beach, the sea and the unique natural environment became an ever-changing piece of art in the interior.

Over 100 years of love
With four forward-thinking high class restaurant concepts, an internationally awarded spa, and a fully booked Summer concert calendar, it’s only fair to say that Hotel Tylösand offers treats and inspiration you can only find here.